Once upon a time there was a scheming crown prince whose half brother, the king, shunted him aside and installed his own son as heir to the throne. Frustrated, the prince — his late father’s favored son — cultivated allies and waited for turmoil to sweep the land before initiating a plan to take over. But at the last moment, the king’s men netted the conspirators and halted the coup in its tracks. Abashed, the prince saw the error of his ways and repented; peace was restored to the kingdom.

That has been the Jordanian government’s story since Prince Hamzah bin Hussein, the country’s onetime crown prince, was detained last week amid accusations of spearheading a seditious, foreign-backed plot to destabilize the country and replace its monarch, King Abdullah II. Some 18 others — including Hamzah’s staff and associates, several top officials and a relative of the royal family — were also arrested.

In the palace’s telling, the tale of brotherly betrayal ended this week with the prince pledging fealty anew to the king, who, in his first public statement on the matter, said Wednesday that sedition from “inside and outside our house” had been “nipped in the bud, and that our proud Jordan is safe and stable. … Hamzah today is with his family, at his palace, in my care.”

Yet many Jordanians see that official narrative as little more than an absurd fairy tale. The prince has yet to make any appearance, with no word on the fate of the others detained. Meanwhile, the strife has torn through Jordan’s long-cultivated reputation of a benevolent autocracy so staid and stable that it’s often called the “Hashemite Kingdom of Boredom.”

The palace intrigue has also set off alarms in the region and faraway lands like the U.S., which counts Jordan as one of its most dependable allies and an important partner in a turbulent neighborhood.

In the days since the prince’s declaration of loyalty Monday, and in spite of a government-issued gag order proscribing public discussion of the case, Jordanians have engaged in just that, including on the social media platform Clubhouse, which is banned in Jordan and only accessible via VPN. On Twitter and Facebook, tens of thousands changed their profile picture to that of the prince, with activists daily joining hashtag campaigns asking: #Where_Is_Prince_Hamzah?

Skeptics of the official palace line believe the prince is being muffled by a king and government upset over his criticism of their rule and of Jordan’s slide into political and economic malaise.

The families of those arrested, some from prominent tribes such as the Majali, Bani Sakher and Fayez — the traditional bedrock of the monarchy’s support — have clamored for word of their kinsmen and called for protests Saturday.

“Our sons were kidnapped and are missing since Saturday, and we know nothing about them, where they are and which party kidnapped them,” the detainees’ families said in a statement Thursday, adding: “We hold the state fully responsible in case any one of them is harmed.”

The United Nations’ human rights office said Friday it was unclear whether Prince Hamzah remains under de facto house arrest and expressed concern over the detentions. “It appears that no charges have been yet brought, and we are concerned at the lack of transparency around these arrests,” U.N. human rights spokeswoman Marta Hurtado told reporters in Geneva.

The Jordanian government’s insistence on bygones has been undercut by its refusal to give details on what exactly transpired to make authorities move on Prince Hamzah and his putative co-conspirators, or which foreign entity was purportedly behind him.

“When you create a narrative, you have to defend it. I’ve never heard of people mentioning a foreign plot without identifying who the foreign element is,” said Daoud Kuttab, an analyst and journalist based here in Amman, the Jordanian capital. “This happened, it’s a family feud, it came out in public.

“Now they’re dealing with it in the family. … But the underlying accusations of ineptitude, corruption and absence of genuine communication between people and those in power have not gone away.”

Another factor keeping the matter in the news is an almost-daily drip of recorded conversations leaked to social media featuring the prince defying officials who came Saturday to warn him against meetings outside the palace and speaking out against mismanagement of the country.

“I’m a free Jordanian, the son of my father. I have the right to mix with my countrymen,” he said when army Chief of Staff Maj. Gen. Yousef Huneiti told him he had crossed “red lines.”

The first sign of trouble came when the government announced Saturday it had arrested Bassem Awadallah, a senior aide and confidant to the king; Sharif Hassan bin Zaid, a royal relative who had worked as a special envoy to Saudi Arabia; and unnamed “others.” It also denied rumors that Prince Hamzah was under house arrest.

But Hamzah blew apart that story with a pair of videos, leaked via his lawyer and broadcast by the BBC, saying his communications had been cut and his security detail withdrawn. He denied involvement in any foreign conspiracy, and excoriated the country’s leadership — without explicitly mentioning the king — for corruption, nepotism and misrule.

“The result has been the destruction or the loss of hope that is apparent in pretty much every Jordanian … and a life under constant threat because we simply want to speak the truth,” he said.

Two days later, amid feverish speculation regarding his fate, Hamzah issued a statement saying he had acquiesced to the mediation of Prince Hassan bin Talal, paternal uncle to both him and Abdullah, and that he would place himself in the king’s hands.

By Wednesday, in a statement read out by a state television broadcaster, the king expressed “shock, pain, anger” at his half brother’s actions, but said that the prince had agreed to put “Jordan’s interest, constitution, and laws above all considerations.”

But few believe the affair is over. Lamees Andoni, a veteran Jordanian analyst, said Prince Hamzah’s only immediately obvious fault appears to be attending social gatherings with tribal leaders who had criticized the king and his policies.

“The charges against him and others are tantamount to treason. Those involved need to be put on trial after a transparent investigation,” Andoni said. But she added that there was no logical link between the prince and figures such as Awadallah, a Jordanian of Palestinian origin seen as working against the interests of the Indigenous, so-called “East Bank” tribal leaders Hamzah had courted.

Besides, Andoni said, far from sidelining Hamzah, the crisis has made the prince more popular than ever. It didn’t help that the prince’s criticisms were easy to agree with in a country beset by soaring unemployment, along with a sense of endemic and rapacious corruption.

Among different tribes, clan elders have long complained of the king favoring upstart leaders and excluding them from government assistance and state jobs. Meanwhile, the economy is on life support, ravaged both by the coronavirus and the government’s aggressive response to the pandemic. (The kingdom registered 96 deaths on Thursday, bringing the COVID-19 death toll to more than 7,500.)

Prince Hamzah also benefits from the country’s nostalgia for his father, King Hussein, a beloved monarch who cobbled together different groups of people into a country that weathered multiple wars with Israel and an Arab world fractured between the U.S. and the Soviet Union. Hussein himself survived a failed coup and more than a dozen assassination attempts.

Abdullah has arguably faced no less tumult. When he came to power in 1999, with Hamzah as crown prince (Abdullah replaced him with his son in 2004), Jordan was a country of 5 million. The population is now double that, including hundreds of thousands of Syrians and some 2 million Palestinian refugees and their offspring.

Jordan has since navigated the U.S.-led invasion of neighboring Iraq, the global financial crisis, the Arab Spring uprisings, the Syrian civil war, the rise of Islamic State and the pressures of a Trump administration less sympathetic to Jordan’s stance on the Israeli-Palestinian conflict.

In contrast to his father, King Abdullah, a 59-year-old British-educated former special forces operative, is often roasted by critics for his labored Arabic. Many believe he avoided going on television Wednesday so that his language skills would not be compared to those of his half-brother, who looks and sounds like their father.

The crisis has also strengthened the impression that Abdullah is uninterested in solving the country’s problems, Kuttab said.

“The king’s credibility has suffered because of what happened, and they’ll need time to fix it,” Kuttab said. “It’s not just an issue between brothers; you have to convince the people. You don’t just put people in jail, put up some others on state TV and expect people to run around the flag.”

Andoni agreed, saying the crisis only compounded the king’s woes.

“The most dangerous matter is that people don’t believe the palace. Jordan needs political and economic solutions, and the king needs to hear there is popular anger over living conditions and that people want real representation,” she said.

Gaetz loses another staffer as fallout around investigation continues

Mozambique’s conflict and the question of foreign intervention 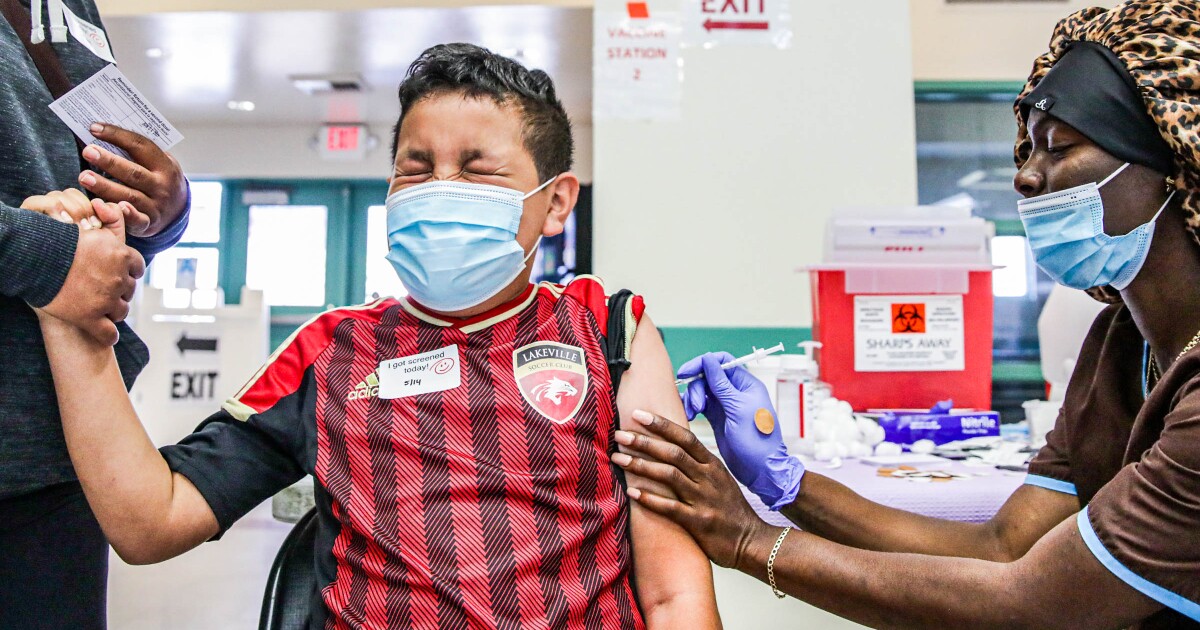 Some vaccine experts having second thoughts about rushing to inoculate kids